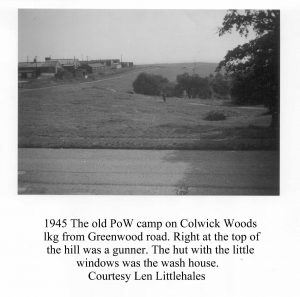 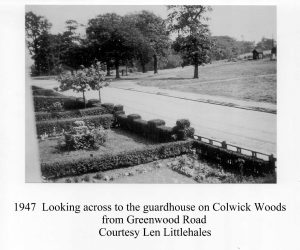 This 1954 map shows where the Prisoner of War Camp was located near to Greenwood Road.

Today there are no visible signs of exactly where the camp was situated.

Originally we believe this camp site was an army barracks, housing personnel who manned anti-aircraft emplacements that were to protect the ordinance depot in the Meadows area.

Recently opened, as an emergency measure for families in urgent need of accommodation, the former German prisoner-of-war camp at Colwick Woods now houses 24 families. First to occupy a hut at the camp were the “caretaker family” – Mr and Mrs C Conduit and their small son, who moved in a month ago.
Among Saturday’s arrivals were Mr and Mrs H.M Rose and their three children.  Before coming here the Rose family lived in very difficult circumstances, and the move to their new –  if temporary –  home has been a great relief to them.  “Even the children are happy with the hut,” Mrs Rose told an “Evening News” reporter.  “We find it much better, and we certainly wouln’t change it for our former place,” she added.  Mr Rose is a miner at Babbington Colliery.
On Council List
Another hut dweller, Mrs Brown, wife of Mr L Brown, a miner, had but one complaint about the camp – the dusty cinder paths, which her energetic youngsters “tramp all over the house”.  Apart from this, Mrs Brown has nothing but praise for the scheme.
Mrs Brown has had her name down for a council house some three years and expects to get one “some time in the 1950’s”!
The four-acre camp has 14 Nissen huts and 12 wooden huts, a bathroom and laundry building for the women and showers for the men.